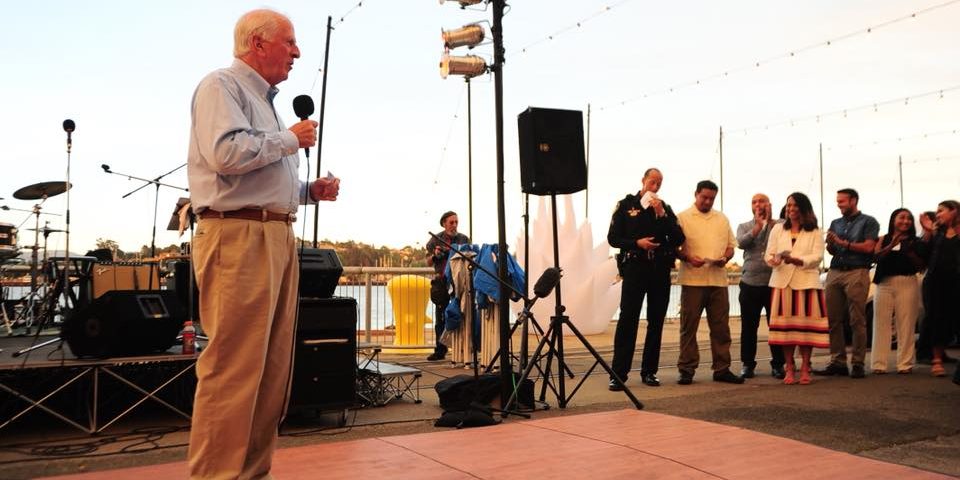 From the Vallejo Times Herald:

Never did Pati Poblete imagine her son’s shooting death in 2014 would unite such a diverse segment of the Vallejo community.

But, two years into the Robby Poblete Foundation and on the heels of Saturday’s 450 people of all walks of life attending the nonprofit’s annual fund-raiser, she’s convinced.

“From the start of our foundation, I have been constantly amazed by the show of support from the community. This event was no different,” Poblete said Monday afternoon. “I hoped to match the number of attendees we had last year, which surprised us back then at 320 people.”

Poblete was thrilled, obviously, reflecting on a sold-out gathering at the Mare Island Brewing Co. near the Coal Sheds on Mare Island. The demographics, she said, were even more cause for celebration with the people “representing different parts of the community: artists, business, labor, nonprofits, law enforcement and public officials.”

The only apparent “lowlight” was a damaged golf cart, on loan for the night from the Mare Island Golf Course. Poblete believes an inebriated guest drove off in the cart, crashed, and vanished.

“It is disappointing that such a positive community gathering included this incident. I’m not sure how much it will cost the foundation,” said Poblete, lamenting that “whatever it is, is money that could have gone to our programs. But it could have been worse.”

Fortunately, the dinner, silent and live auction, and merchandise sales plus some significant donations at the event raised a nifty sum that is earmarked for the foundation’s three-pronged mission: gun buy-back events, the “Art of Peace” project converting firearms into art, and a vocational component.

Poblete became so attached to the “Art of Peace” contributions by various artists — on display at Temple Art Lofts gallery for a month — “that I was torn about auctioning” off the impressive works.

“Those pieces were very emotional for me. They each have a powerful story behind them,” Poblete said. “So, of course, I think they are priceless. But I am happy there was interest in them and that will live on in the message of peace.”

The “Art of Peace” included John Ton’s “Robby’s Arc,” featuring Poblete’s late 23-year-old son as a welder surrounded by a mosaic of shell casings and bullets.

Though Poblete was “sad to see” the emotional piece auctioned for $1,500, it went to Dorothy Manibusan and Mark Mullholland — Poblete’s family friends.

“They informed us at the end of the night that they ‘won’ it as a gift to us, so that it could remain with our family,” Poblete said.

Along with auctioning the other heart-rendering pieces, “is was always part of our plan — to auction them off to sustain the program,” Poblete said.

Poblete said it was difficult to not get emotional during the 6 to 10 p.m. fundraiser, as she was touched “by the outpouring of love and support from the community and the speakers. I kept thinking, ‘We are only 16 months out as a nonprofit. This is amazing.’ Another thing that surprised me is the amount of help we were able to get from the almost 40 volunteers.”

Beyond the admission revenue, auction and merchandise income, Thompson pledged a $2,500 donation and Kaiser Permanente handed Poblete a check for $5,000 as did the Susie Tompkins Buell Fund of the Marin Community Foundation. Sponsors contributed around another $20,000.

“I think people in the community see what we’re trying to do and they want to be part of bringing positive changes,” Poblete said.

The multi-component mission of the foundation “makes for unlikely alliances at times, but it is also a great unifier,” Poblete said. “I think that’s why we’re able to get so many people out to our events.”