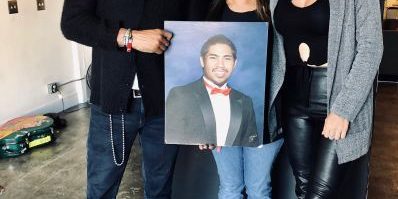 Pati Poblete was once shy in public. No more. Not by a long shot. Unfortunately, that’s literal.

The shooting death of Poblete’s 23-year-old son Robby in 2014 motivated and inspired Poblete to take her fight against gun violence to the marches, to high-profile speaking engagements, and now to a music video by BottleRock Napa Valley Music Festival regular Michael Franti.

“The Flower,” sung by Franti and Victoria Canal, debuted live at the End Gun Violence Together Rally in Los Angeles and the music video was released Jan. 16.

The video features a cross-section of America and includes gun violence survivors and victims’ families, highlighting Marjory Stoneham Douglas School, the Pulse Nightclub in Orlando and the Route 91 Harvest Festival in Las Vegas “as well as daily acts of gun violence in cities across America,” Franti said in a news release.

Robby Poblete’s death in Vallejo is one of those “daily acts,” with Pati Poblete clutching her son’s photo in an early moment of the video and she returns near the end of the song holding a gun barrel and a white flower.

“It’s a beautiful and heart-wrenching at the same time,” said Poblete on Tuesday, reflecting on the video and song. “I know Michael and his team specifically sought people who have been impacted by gun violence and have show resilience in the face of these tragedies. It’s amazing to see all the people in the music video because you know that they have all turned their tragedies into something positive. But, at the same time, it also reminds you how gun violence has affected so many lives and taken so many people from us.”

Poblete turned her tragedy into The Robby Poblete Foundation, with a mission statement of raising awareness, educating through an “Art of Peace” project and channeling funds into job training.

Franti found Poblete via Rudy Corpuz Jr., who started United Playaz, a partner of the Poblete Foundation in San Francisco.

“They told him they were looking for people who have been impacted by gun violence and have turned the experience into something positive,” Poblete said. “I was one of the people he recommended.”

Franti’s team contacted Poblete a few days before they were set to film in San Francisco.

“I learned that the music industry can and should play a role in taking a stand against gun violence,” Poblete said. “The video was raw and stripped down, unlike a lot of music videos with special effects and heavy production. And when you’re trying to convey the message that this song is trying to convey, that was all that was needed.”

Poblete believes Franti’s music video can make a social impact like songs “we saw a lot of in the ’60s and ’70s,” songs that have “stuck with us and spoke to the times. I believe this song belongs in this category. It tells the story of where our country is today in terms of gun violence and it challenges the viewers to look beyond the headlines and into the eyes and hearts of the people in the video. I always say, when you you move the heart, then you can begin shifting the mind.”

Because the Poblete Foundation was involved in the video, “it tells me we are part of the dialogue on gun violence and that our story matters.”

Finding time for this interview after speaking Monday at  Oscar Grant Plaza in Oakland and preparing for this Saturday’s panel on gun violence at the Florence Douglas Center in Vallejo, Poblete said the response to her appearance in Franti’s video “has been great. The minute the video was released, friends and family members were posting it on their pages and tagging us. That’s actually how I found out the video was released.”

Poblete was en route to delivering a presentation at the Juvenile Detention Center in Fairfield when alerted to the video. She pulled to the side of the road, viewed the video, and cried.

“I had to collect myself before speaking,” Poblete said. The video reinforced her mission.

“I went in knowing that what I had to say mattered and that I could help change their lives,” she said.

The music video has been posted on robbypobletefoundation.com to increase the exposure and Poblete said she’ll show it whenever possible at her speaking engagements.

“We are part of a national movement that wants to put an end to all these senseless killings. Sadly, it’s not enough to see me talking about losing my son,” Poblete said. “We plan to use this video to show people that I’m just one of so many people across the country, from all walks of life, trying to transform tragedy into hope.”

Poblete said Franti was inspirational from the start.

“He greeted me with his long arms extended wide and it reminded me of the phoenix in our foundation’s logo. He put me at ease right away and I knew his intentions for this video was pure,” Poblete said. “Just before filming, he told me, ‘Just think of Robby. Close your eyes and imagine him here.’”

To view “The Flower” — https://www.youtube.com/watch?v=w0N5OEpxbFY.