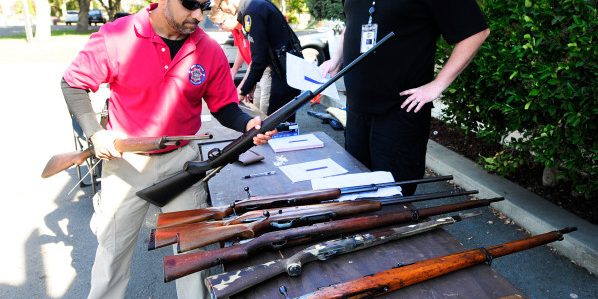 Pati Navalta has dedicated much of her life to crusading against gun violence since her son, Robby Poblete, was shot and killed in Vallejo at age 23 on Sept. 14, 2014.

The Robby Poblete Foundation has promoted “Art of Peace,” transforming unwanted guns “into instruments of hope,” offered educational opportunities in skilled trades, and, among numerous honors, was named California’s Nonprofit of the Year.

Immensely satisfying? Sure, said Navalta. But it hasn’t been easy, especially with detractors. Navalta’s response to her announcement on Facebook of the Dec. 14 Gun Buyback at the Solano County Fairgrounds:

“I’ve been accused of: 1) collecting weapons to distribute to the cartel; 2) stealing taxpayers’ money to purchase gift cards (all funds used for gift cards are from RPF grant money and fundraising); and working with the CIA to roll back the Second Amendment. Oh, I’ve also been called a communist and a boot-licker several times (not sure what that means, but I assume it’s not a compliment).”

All this despite orchestrated buybacks not just in Solano County, but San Francisco,  Richmond, and Augusta, Ga., with Berkeley, Santa Rosa, and El Paso, Texas, asking for Gun Buyback help … often following a mass shooting.

“As the (negative) comments started rolling in, I was deleting them one-by-one for the most part,” Navalta said. “I would tell myself not to read them, but I couldn’t help it. One of them said — and I’ve heard this before — that they ‘wouldn’t give me their gun, but they will give me their bullet’ and that’s a threat.”

Navalta has to continually emphasize to “the haters” that the buyback is a volunteer program.

“I don’t understand why I get that (negative) reaction,” Navalta said. “If they have guns they no longer want around the house, I’m helping them provide a safe way to dispose of them.”

Navalta wouldn’t speculate if the detractors would change their view if they, too, had a child shot and killed.

“It’s hard for me to crawl into their skin. Their way of thinking is so opposite of me,” she said. “Their argument that the best way to protect your kids is to have a gun yourself. We know that’s not true. You have officers shot and killed and they are the most-armed people. Maybe if they had a child killed by gun violence, that would allow them to see how people like me are trying to make a difference.”

Because the Robby Poblete Foundation gets calls for gun buyback help following mass murders, “it tells me we’re doing something right,” Navalta said.

Though the foundation has helped remove more than 1,000 weapons from personal ownership, “it’s hard to quantify, hard to say how many people we may have saved. I can tell you that every firearm surrendered … the probability of that gun used in killing someone has dropped to zero,” Navalta said. “There’s no disputing that.”

The Poblete Foundation is using grant money and $6,500 Navalta raised via her “birthday fundraiser” online to buy the gift cards exchanged for surrendered guns. Law enforcement personnel are donating their time and the fairgrounds offered at McCormack Hall.

Using a gift card as an incentive “is a big motivating factor” in surrendering guns of all models, Navalta said, emphasizing that “gun owners don’t have to wait for a gun buyback. If they want to get rid of them, call your local police and tell them you’d like to surrender these firearms safely.”

All surrendered guns are dismantled — as well as weapons collected from Northern California law enforcement agencies — and distributed to selected artists for the foundation’s “Art of Peace.”

The first Solano County Gun Buyback sponsored by the Poblete Foundation in 2017 yielded 180 weapons. Last year about 115 were turned in.  Numerous assault weapons have also been surrendered, Navalta said.

Up to $100 in gift cards are given for each rifle and shotgun and up to $200 in gift cards for each handgun and assault weapon, as classified by the State of California. Ammunition and other weapons will be accepted, but there is no gift card compensation.

Removing firearms from circulation has been Navalta’s No. 1 personal achievement for the foundation, she said, recalling last year when a man brought in an assault weapon after discovering it in his schizophrenic son’s bedroom.

“I heard one of our law enforcement partners say it’s the same weapon they use to train their SWAT team,” Navalta said. “The man said he was going to throw it in the river but his daughter noticed we were having a buyback. That, to me, meant everything. He found a safe way to dispose of it as opposed to throwing it somewhere where it may have been found.”

The gun buybacks, the Art of Peace projects and offering trade school scholarships and securing jobs keeps Navalta motivated. Her work as editor of San Francisco Magazine keeps her sane.

“I was out there every day for two years talking about how my son was shot and killed,” she said. “I was engulfed in my trauma every single day. When tragedy like this hits a family, you have to figure out who you or or you lose yourself. I had to get a job and discover myself without losing sight that we have this amazing foundation.”