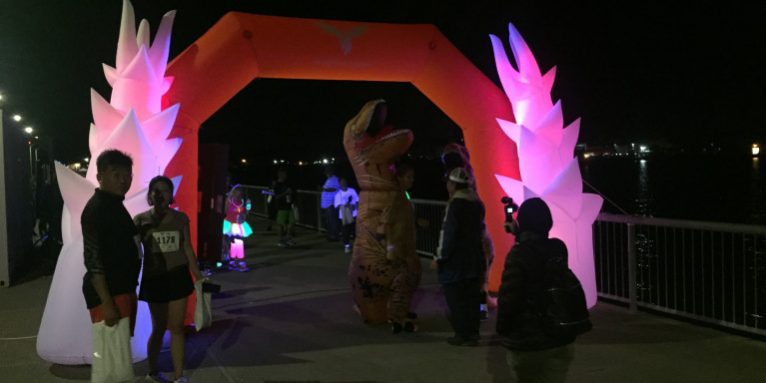 Even though Robby Poblete was murdered just over four years ago, but his spirit shined extremely bright Saturday night at the second annual 5K Glo Run at the Vallejo Waterfront Weekend.

For the second consecutive year the Robby Poblete Foundation put together a run that featured a few hundred participants, most of them dressed up in costume and wearing some kind of Neon that glowed in the dark. Costumes included groups dressed up as dinosaurs as well as numerous super heroes. One group, all dressed up as Wonder Woman, took home the best group costume.

“It’s been great to see a lot of kids and a lot of families doing something and turning out for some fun in the community,” said Robby Poblete’s mom, Pati Navalta-Poblete. “Everyone seemed to really get into the spirit. I’ve seen dinosaurs, Wonder Women, a few strawberries. It’s been great.”

The run began with a ferry ride from the Vallejo Waterfront Terminal to the newly built Mare Island Terminal, followed by a point-to-point course around Vallejo’s naval base. Runners then finished the last mile going past the Mare Island Causeway Bridge with scenic views of the downtown and waterfront areas. A post-race party then took place at the waterfront with food and music.

All the proceeds of the run benefited the Robby Poblete Foundation and its programs to reduce gun violence and increase opportunities through art and vocational skills programs.

On Sept. 21, 2014, Robby Poblete was gunned down in broad daylight at a Vallejo hotel parking lot. He was just 23 years old. Soon after Pati Navalta-Poblete became heavily involved in gun awareness and began a mission to get guns off the street with buy-back programs.

“It’s a little bittersweet because I’m not going to see my son again,” Navalta-Poblete said. “But to have this event and turn his name into something positive has been great. It’s been great to see the community come out and show that they support his name and the foundation.”

Navalta-Poblete, who is the executive director of the foundation, said putting on the run was a little easier the second time around.

“One of the most difficult things was this event has a lot of moving parts,” Navalta-Poblete said. “We have to make sure the route is all in order, the runners stay in one place for the ceremony after the run. It’s kind of like trying to keep a big herd. But it’s all been very rewarding. To see all the finishers all glowing when coming through, that’s been really awesome.”