Killing machines to art: Confiscated guns transformed into “objects of beauty and grace” 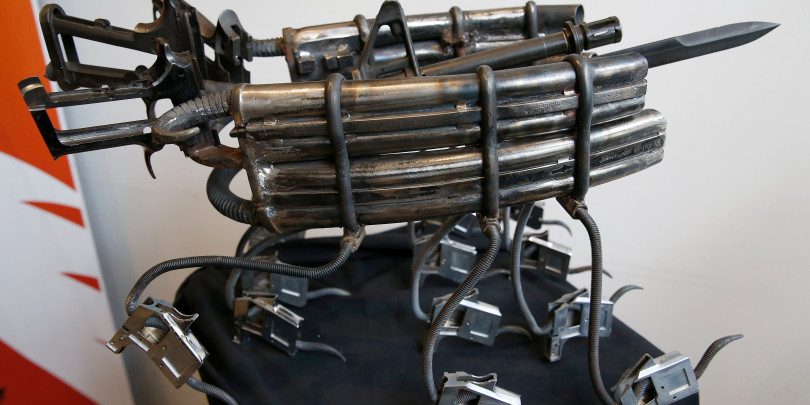 Two right hands are clasped together vertically, the bottom of one a root, the top of the other a tree trunk. But upon closer inspection, those hands are actually pieces of guns.

The “Art of Peace” exhibit made its debut last week at a pop-up gallery on Ninth Street in Old Oakland featuring eight Bay Area artists who created sculptures out of confiscated firearms used in crimes throughout Alameda County.

The project, a collaboration of the Robby Poblete Foundation and the Alameda County District Attorney’s Office, is the first to use guns confiscated by the district attorney’s office. The exhibit aims to send a message to end gun violence.

Pati Navalta Poblete founded the Robby Poblete Foundation after her son Robby was killed in September 2014 in Vallejo. For two years, she couldn’t get out of bed, she says.

Although she began by sponsoring gun buyback programs, the “Art of Peace” exhibits changed the message from confiscation and destruction, to one of more transformation, awareness and hope.

Gun violence plagues communities, says Alameda County District Attorney Nancy O’Malley. Over the past 30 years, her office has received more than 1,000 firearms collected as evidence during prosecution of such crimes as of murders, attempted murders and robberies. Instead of destroying the guns by burning the metal and releasing pollutants into the air, the project looked to re-imagine “these instruments of violence into objects of beauty and grace,” O’Malley says.

“It’s clear that your heart and soul, your commitment and everything you had to offer went into these pieces of art,” she says.

A licensed company was used to make the firearms inoperable, separating them into parts before handing them over to the artists to use for their pieces. The overarching message in each piece: to end gun violence.

Artist Rebecca Anders created “Holding On” using only gun parts for the piece that looks like two hands holding onto each other. She says she appreciated the request of transforming the material into art, and in turn took the idea of transforming the act of holding a gun with a hand.

The two hands are joined, as if someone is reaching for help, and being helped, she says.

“That act, that interaction is so much more stronger, more valuable than a gun being held,” Anders says.

The tree symbolizes reliability, and having that vulnerability to ask for help, she says.

“If we can build a social philosophy of reliability and trust, and acceptable weakness, I think we’ll have less desperation,” Anders says.

Natasha McCray-Zolp and Shameel Ali used more than 300 bullet casings in their piece “300 Shots Fired” — a bicycle or “peace cruiser” that has messages of unity, community and diversity engraved into it. Made almost entirely of gun parts, including the wooden rifle pieces, t. The piece is reminiscent of Oakland itself, as the artists thought of scraper bikes popular with the city’s youth.

“We wanted to come up with a sign that resonated with childhood, thinking of the past, nostalgia with moving forward, and taking something and transforming it into a positive,” she says.

As artists, she says they try to give old material new life. In this case, they were fortunate to take this material that has ruined people’s lives, and give it new hope and life.

The bike, which features wooden rifle bits, and a seat made of the bullet casings, also has an LED light that projects a peace symbol from its headlamp.

The pieces will eventually be auctioned off, with proceeds going to sponsor a future art project.