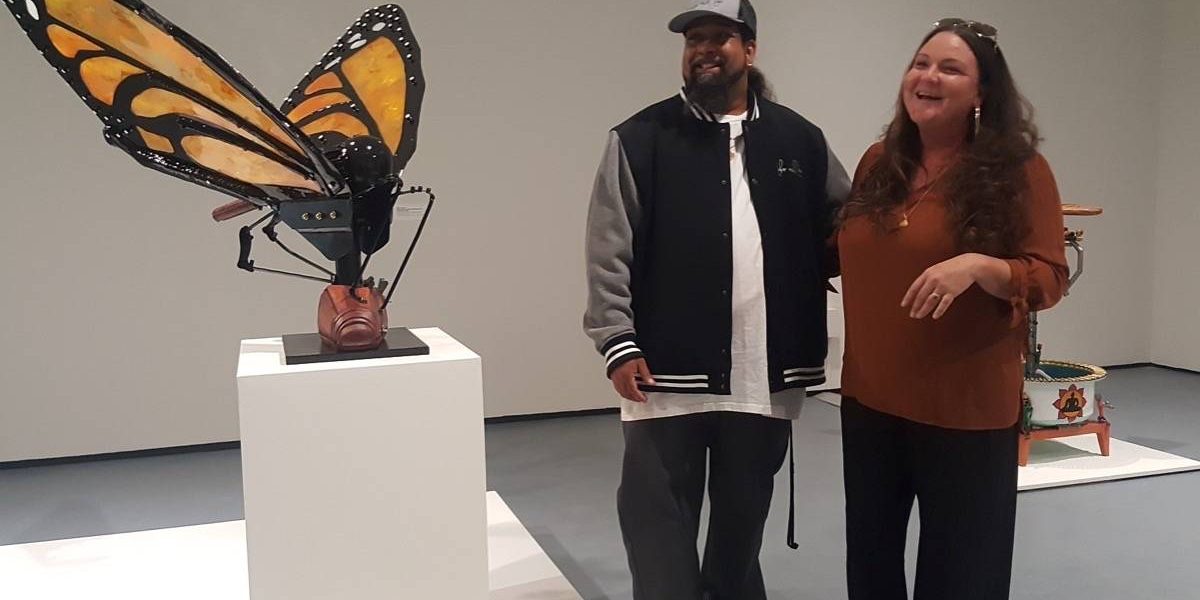 With “Art of Peace,” an exceedingly powerful exhibition at Yerba Buena Center for the Arts, Pati Navalta Poblete is fulfilling her mission to get guns off the streets and into galleries.

“Every one gives me the chills,” said Poblete, describing the 10 evocative artworks made from dismantled firearms at the show’s opening reception on July 23.

With the tagline “transforming guns into instruments of hope,” the free exhibit dedicated to ending gun violence is the fourth installation presented by the Robby Poblete Foundation, a weapons buyback and community art program Poblete set up with the help of municipalities and law enforcers after her 23-year-old son was fatally shot in 2014 in Vallejo.

Looking at the second-floor gallery’s sculptures, she said, “These were guns. They have become a thing of healing.”

She pointed to 2017’s “Robby’s Arc,” the exhibit’s oldest, perhaps most personal, work by John Ton. Made with shell casings, rifle barrels, metal, pistol replicas and a welding machine, the obelisk pays tribute to Poblete’s son, who was learning how to weld before he was killed.

“He lost the opportunity for love; he didn’t have kids or get to walk with his child,” said Ton, a Petaluma artist, referring to gold leaf silhouettes picturing a young man in those pursuits on the artwork.

Many “Art of Peace” sculptures were created with pieces of 244 guns and 24 assault rifles collected by United Playaz, a San Francisco violence prevention group serving young people, and disassembled by the San Francisco Police Department.

United Playaz Executive Director Rudy Corpuz said artists came to the group’s Howard Street clubhouse — “all the gun parts were on the table” — to pick up their raw material, and called the completed display phenomenal and amazing — that something so destructive could be so beautiful.

“Resurrection,” a big, graceful butterfly made with rifle and shotgun barrels and poured resin mixed with ground-up 9mm bullets, was created by El Sobrante designers Natasha and Ali. It’s the third collaboration between the married couple, who call their collective Labor and Love, and the Robby Poblete Foundation.

Initially inspired by seeing an insect fluttering by, they decided to focus on the concept of transformation by capturing the moment a monarch butterfly emerges from its cocoon.

Vallejo artist and guitar maker Nick Fullerton, who works solely with recycled materials, made his 2019 “Solar Peace Fountain” with a tub, gears and welded gun parts. Initially powered by the sun, it’s been temporarily revamped so the water flows inside YBCA’s gallery.

A decommissioned Smith & Wesson revolver becomes a slide projector of sorts in “Ahimsa,” a heart-stopping, interactive 2018 work by San Francisco conceptual artist Constantine Zlatev, aka Made in Constantine.

When patrons push a button at the side of the sculpture — whose title “Ahimsa” means “do no harm” in Sanskrit — bullets don’t emerge from the cylinder. Rather, images of prominent nonviolent leaders (including Mahatma Gandhi, Martin Luther King Jr., Ursula Franklin, Desmond Doss, Eric Bogle and Muhammad Ali) flash on a round screen.

Bay Area sculptor and model maker Kevin Byall’s captivating 2019 mobile “Doves of Peace” is so lovely, it’s hard to tell that its delicate little birds are actually parts of handguns.

Noting that many people associated with “Art of Peace” have been affected by gun violence, YBCA Chief Executive Officer Deborah Cullinan said, “If we can all be in the same place, we can get it done.” In an effort to move people to action, free entry to the show is offered to those who register at https://ybca.org/whats-on/art-of-peace.