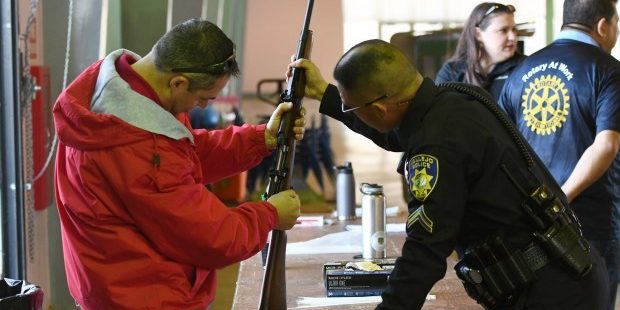 For over two years Pati Navalta could not get herself to go to Vallejo. And who could really blame her? After all, it’s where her son, Robby Poblete, was killed by gun violence in broad daylight at a busy intersection on Sept. 21, 2014.

But like a phoenix, Navalta has risen to help carry on her son’s name.

“Today is always an emotional day,” said Navalta, the founder and executive director of the nonprofit organization. “Every time I set this up I wish I wasn’t doing it. Look, I love doing this but if my son was here this wouldn’t be happening and I wouldn’t be here. But the fact that I’m here helping save lives in his name means its not for nothing.”

At the time he was killed, Poblete was working at a biotech company where he was also learning how to weld. He was on the verge of becoming a full-time employee and was already making plans to build his own weld shop. The firearm used to end his life was obtained illegally, and then resold on the streets.

Navalta was happy with the turnout halfway through the day.

“I was honestly hoping to get 50 guns and in the first hour we had over 100 guns turned in,” Navalta said. “We’re up to 127 guns bought back and we still have two hours to go.”

In three years the Poblete Foundation has gotten over 400 guns out of circulation in Vallejo alone, as the foundation’s first gun buyback in 2017, held in partnership with the Eric Reyes Foundation and the Vallejo Police Department, yielded 180 weapons. In 2018, 115 more firearms were turned in.

Instead of using guns for violence, Navalta also hopes to turn the guns into pieces of art like some used for the foundation’s Art of Peace project. The most recent Art of Peace exhibit, in partnership with San Francisco-based nonprofit United Playaz, attracted 500 visitors to the Yerba Buena Center for the Arts. Navalta said she has an idea for an art project she’d like to make herself, but was keeping those thoughts to herself for the time being.

Vallejo Police Department Sgt. Jeff Tai said the majority of the guns that had been returned this year were handguns. The event was a “no-questions asked” buyback, so the few people turning in guns that this paper tried to interview responded kindly with “no comment.”

Rich Botello, a corporal with the Vallejo police and the evidence and property manager, mentioned that most people had no responses when turning their weapons over, but he did admit that some were very appreciative of the program and doing this service for them so they didn’t have to keep the weapons they didn’t want anymore in their home.”

Botello said that after the weapons were confirmed unloaded and safe, they were brought inside the hall. The weapons were then put in buckets and bins.

“At the end of the day after the final tally, the weapons are transported for evidence where they are checked into the databases to see whether they are stolen or not,” Botello said. “A stolen weapon, we might follow up on that, but other than that, because it’s anonymous, the weapons are destroyed.”

Tai also said that most people don’t explain why they are bringing in the guns, but the Vallejo police officer brought up a 2018 incident in which an assault weapon was brought in to the buyback that was the same type of weapon used in training for the police department.

“The man eventually shared the information about the gun,” Tai said. “He said he found out his son, who has schizophrenia, was keeping the gun. The man originally was afraid to do anything with it and wanted to dump it in a river, but instead he took it here. So you take the gun away from a person with a mental illness. And who knows who then finds it in the river. A lot of lives were potentially saved with him turning in that gun.”

That’s what Navalta said she saw when she looked at all the guns in the bins and buckets. See didn’t see weapons, she saw lives saved.

Navalta said that every day she wakes up and it’s hard knowing her son is gone, but the day had another meaning on Saturday as it was also the seventh anniversary of the Sandy Hook Elementary School shooting that occurred in Newtown, Conn. That day 20-year-old Adam Lanza shot and killed 26 people, including 20 children between the ages of  6 and 7 years old, and six adult staff members. Before driving to the school, he shot and killed his mother at their Newtown home. As first responders arrived at the school, Lanza committed suicide by shooting himself in the head.

“Any day for me is tough, every day is tough,” Navalta said. “But for me the Sandy Hook shooting is personal because I relate to all those parents. I know exactly what those 20 parents or so woke up to that day. I know what it’s like and I also know what it’s like to be parents and be attacked in social media.”

Navalta is speaking about how she still gets threats and attacks from people who do not want their guns taken away.

“Yeah it still happens a lot on social media,” Navalta added. “What these people don’t seem to understand is that this isn’t a political issue for me this is a human issue for me. This is not because I’m a Democrat or because I don’t like Republicans. I’m trying to create a space to service gun owners who no longer need these weapons. If they don’t want it anymore I’d rather them bring it here so it’s not used on the street.”